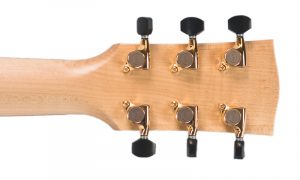 Sometimes life hands us a binary choice; I recall how my heart would sink when the middle school lunch-lady would issue her daily demand, “peas or fruit?” (I suppose a tossed salad would be out of the question, then?). Acoustic guitar buyers have, for years, been similarly constrained – mahogany or rosewood? Today, the situation is quite different. Expanding horizons of taste, combined with a tightening of supply for traditional guitar materials, have led to a virtual explosion in back-and-sides wood choices in the acoustic guitar market. Many of these woods are being marketed as close substitutes for one of the “big two,” with similar tonal characteristics and (hopefully) less negative ecological impact. This is a good hedge against the day when mahogany and rosewood become truly scarce, but whither tradition? Must I play a Venezuelan beaverwood OM to save the rainforest?

Never fear, conservation-minded traditionalist. How about a wood that’s nearly as common as grass, but with a history of use in guitar building stretching right back to the beginning? I am speaking of maple, a frequently overlooked choice for the tonewood of the backs and sides of fine acoustic guitars. Often thought of more in the context of archtop backs (or Les Paul tops), maple has been used to great effect on some of the greatest flat-tops in history. Gibson’s J-200 springs to mind, but decades before that they were using maple for Nick Lucas Specials and L-C “Century of Progress” models, among others. Too modern? How about an 1834 Martin with maple back and sides? More than one are known to exist, but even those early American maple guitars seem positively au courant when compared to the maple guitars of Antonio Stradivari. Yes, the same Stradivari known the world over as the violin maker’s violin maker. He was using maple for his 5-course Renaissance guitars in the 1600s, and if that doesn’t qualify maple as a traditional tonewood, then I can’t imagine what would.

As with mahogany, the term maple is used to refer to more than one species commonly encountered in lutherie, but the range is somewhat narrower. Red Maple, Acer rubrum, is one of the most common varieties in guitar building; this is perhaps fitting, as the U.S. Forest Service lists Acer rubrum as the most common tree in America. This is one of the so-called “soft” maples, the others being bigleaf maple (Acer macrophyllum) and silver maple (Acer saccharinum), omitting a couple of species not often seen in guitars. Rock maple or sugar maple, Acer saccharum, stands alone as the only “hard” maple, and is indeed often referred to formally as “hard maple.” 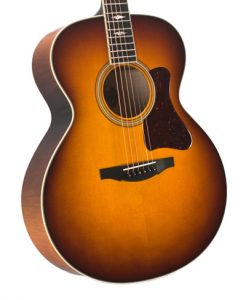 So, what’s the difference? Let’s talk about the similarities first. All maple is characterized by relatively low-velocity transmission of vibration, with high internal dampening. Where rosewood will tend to propagate and amplify vibration, emphasizing overtones and sustain, maple tends to shut that down fairly quickly. Now, why in the world would you want a guitar back that does that? Well, put another way, a maple back stays out of the way of the guitar’s vibrations, allowing you to hear more of what the top itself is up to. Plus, the dampening effect of maple enhances note separation and clarity. This explains why it is the go-to wood for archtops: with so much going on harmonically in jazz, the wild overtones of a rosewood guitar would produce the effect of holding the damper pedal down on a grand piano – mud. In a good maple flat-top, the effect of maple can be like having an individual volume slider for the treble, middle, and bass register of the guitar. With fewer clashing overtones, it’s easier to lift up your melody over your accompaniment, emphasize some interesting middle movement, or break up your basso ostinato with a dramatic run.

The differences between hard and soft maple are fairly logical. Hard maple is brighter overall than soft maple, owing to its greater stiffness. The dampening effect is therefore somewhat less, taking a hard maple guitar more in the direction of what we’d expect from a mahogany guitar. Soft maple exhibits the most dampening and contributes relatively little tonally (a great thing if you’ve got a world-class top doing its thing a few inches away). Complicating this somewhat is the effect of grain direction on tonal performance. Most maple guitar back-and-side sets are cut on the slab, which shows off any grain figure to best advantage. This reduces overall stiffness as compared to quartersawn wood, to predictable effect. Personally, I would like to see more plain, quartersawn maple used for guitar construction, boring as that may sound. 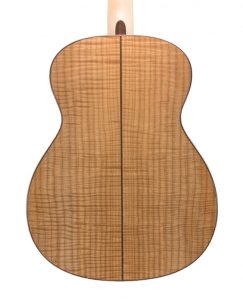 Curly Maple Back on a Goodall “Pacific Model”

An anecdote:  A well-known violin maker in the town of Freiburg, Germany, walked into a small violin shop in the Black Forest, where I used to work, toting a very plain-looking violin. I grabbed a bow and gave it a go – wow! It felt like I had a generator on my shoulder, so great was the liveliness of that back. When I asked him why he built it from timber that looked more like bridge wood, he told me how he found the blank. He was unloading a consignment of firewood from the bed of his pickup, tossing the logs into a pile on the ground. One log hit the pile and rung like a bell, causing him to leap down and snatch it up. He made a quartersawn back-and-sides set from the log, and the result was that cannon of a fiddle. This experience has stayed with me for years, making me yearn for more plain maple instruments.

Still, it’s hard to ignore the appeal of figured maple. Caused by compression of the wood grain during growth, the curly figure reflects light differentially, yielding amazing depth and a true 3D effect. Quilted grain figure, found only in western bigleaf maple, looks like boiling syrup. Birdseye figure occurs primarily in hard maple and looks, well, like little bird eyes, bless their hearts. An extreme version of this is the bubble maple that Gibson once used on archtops to great effect. The more extreme grain figures can definitely have an effect on tone, as the re-sawing process necessarily creates short grain and runout in the blank. But, hey, with looks like that, who cares?

A final note on species differences: take it all with a grain of salt. Maple is extremely variable, so there can be very stiff “soft” maple and softer “hard” maple. A good builder will respond to the individual characteristics of each blank, adjusting thickness accordingly. I myself have carved a hard maple mandolin back that felt like I was carving granite, and another in bigleaf that felt more like rawhide. And don’t get me started on what that lovely, rolling grain does when it meets a carelessly sharpened plane or gouge. Never a dull moment with maple in the shop!

In conclusion, with all of the new and vintage maple guitars in the world, maple still doesn’t get fully acknowledged for the interesting tonal properties it possesses. Try to get past the appearance and appreciate the value of a body that lets the top get where it’s going with minimal interference. Maple: it’s more than just a pretty back! 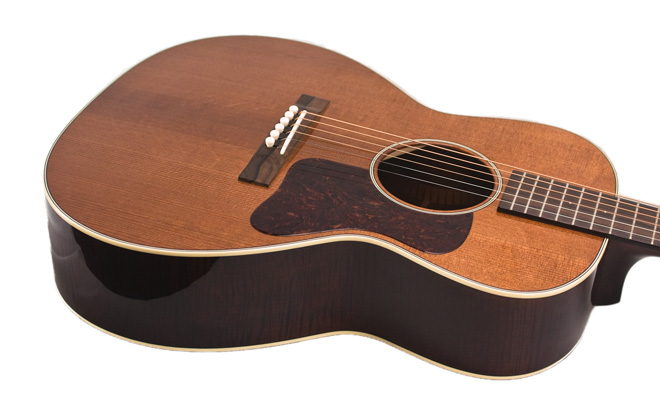 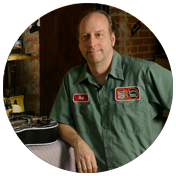 Rob is a multi-instrumentalist with decades of building and repairing under his belt, including extensive experience restoring vintage guitars.