We had the pleasure of hosting Josh Ritter and his band at Sound Pure today. Fresh off the tour bus from a show in Baltimore, they paid an early morning visit to our shop and studio. Also in town was Dawn Landes (Josh’s wife) and her band, who happen to be opening for Josh on this leg of the tour. They play tonight, May 11, 2010, at the Carolina Theater here in Durham—a gorgeous venue only a few blocks from Sound Pure. 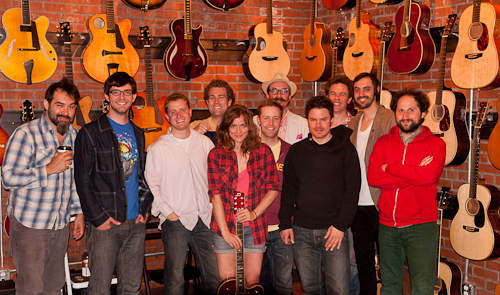 Josh Ritter, Dawn Landes, and crew in the guitar showroom

I’ve gotten to know Josh and his band (Zack Hickman, Liam Hurley, Sam Kassirer, and Austin Nevins) over the past few years through our mutual friend Matt Douglas. We’ve even had the pleasure to open for them a few times with Matt’s band, The Proclivities, in NC and NYC. They’re a fantastic group of musicians and just all-around good dudes.

We let them loose in the guitar showroom and it was cool to see what they gravitated towards. Nash Guitars, Duesenberg Guitars, and Kay Vintage seemed to catch their eyes. Dawn was on a dist/fuzz pedal hunt and ended up leaving with a ZVex Box of Rock that we hope to see it in action at the show tonight!

We’re big fans of Josh’s music here at Sound Pure. His new record So Runs the World Away released last week. It’s a fantastic album we’ve been wearing out since we got it. We’re all headed to the show tonight at the Carolina Theater and hope you attend as well!